The Galician region of Salñés contributes the wealth of its landscape, the idiosyncrasies of its people, the remarkable industrial occupation of the area and also a melange of fragrances of Albariño wine and Atlantic oysters to a story peopled by various families – the Lantaño’s, the Rei’s, the Ferreira’s and the Leiro’s – all interrelated in an imbroglio of infidelity, love, hate, crime and passion. The core of the action takes place in the town of Cambados, home to several generations of the Lantaño’s. The story begins with the disappearance of the patriarch, Don Ramon, and the succession of his son Gonzalo. The Lantaño’s are a paradigm of the region’s economic activities, based mainly on winegrowing and the off-shore cultivation of mussels. They live in a country house, known as a pazo, that has been in the family for some forty years, but has been cared for like one more member of the family. The Ferreira women live in an annex of the pazo and, apart from having secret blood ties to the Lantaño’s, are responsible for serving the main house. These women bring to the story the distinct character of Galician women, with both a melodramatic and a comic side, especially when they are joined by Pepe Pumares. And they are, without a doubt, on the lowest rung of the social hierarchy. Nonetheless, the youngest Ferreira is prepared to jeopardise her life in a bid to get off this rung, rising up in the world of fashion. Other characters play a part in the series: the Rei family, with Xosé Manuel at its head, exemplifies the rivalry between the parishes of Fefiñas and San Tomé. Despite having been born in San Tomé, Xosé Manuel’s marriage to Felisa has established ties to Fefiñas, something that causes an ongoing dispute – the least important – with his son Xan, who feels strongly connected to San Tomé, like his forefathers before him, and plays in a local rock band with a strong traditional spirit. Gloria Leiro represents another very common figure in Salñés- and in Galicia, by extension –: the emigrant who returns from seeking a new life in the Americas. Hers is a special case because she was just a child when she emigrated with her mother and now returns in search of her origins, with the intention to stay. And this is what drives her to repossess the thing she loved above all else: her family’s lands. Other characters make her return less than easy, but she is determined to fight with a steel will to set down her roots in Cambados. 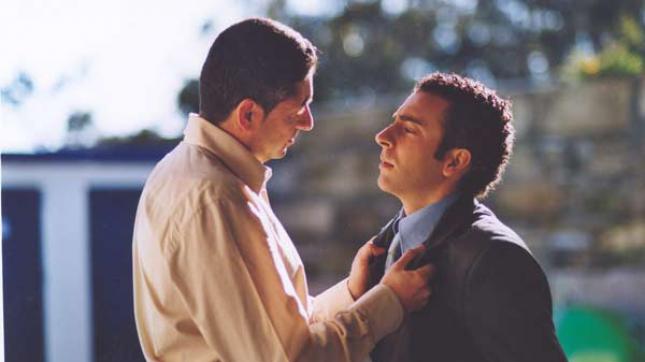