Never more than in the early 1400’s did Spanish, and above all Catalan, cultural influences have such an impact upon all expressions of life on the island of Sardinia. But it was to be primarily in painting that this influence was most decisive, opening the way, within a short space of time, to fully-fledged local pictorial schools, all of them influenced by the work of artists from Catalonia and Valencia. Drawing on the resources that have come down to us through the centuries via the relics of that time, especially altarpieces, our enigmatic narrator takes the viewer back to that past in which these two geographical areas were so closely connected. Through an analysis of the altarpieces’ detailed representations of daily life, of professions and trades, of modes of dress, the program reconstructs the milieu in which the history of Catalan painting developed in Sardinia, focusing in particular on the painter, Joan Figuera. Already a renowned painter of altarpieces prior to his leaving Barcelona for Sardinia, we look closely at Figuera and his work. We see the merchant from Cagliari, Francesco Olivera, accompanied by the custodian of the Franciscan convent of Stampace, commissioning Figuera and Rafel Tomàs with an altarpiece of San Bernadino. We read the contract describing the characteristics of the painters’ dwellings on the island, right down to the furnishings, implements and tools. We watch as young Sardinian apprentices toil under the guidance of their Catalan masters, learning their trade before heading to Catalonia to complete their artistic education. We even study the contract between a painter and the father of an apprentice, detailing all the conditions, favourable or otherwise, to which the young novice would be bound. We decipher the symbolic and aesthetic content of altarpieces and the techniques employed in their making. And we see how, after Joan Figuera’s death, his disciples, together with Catalan and Valencian painters, developed a school of painting in its own right in Sardinia, with its own very particular characteristics. The coherence of a program which combines present day footage, reconstructions of the past, and images of antique documents and paintings, is provided by a our guide, a man who exists beyond time and age, a narrator we find in each place and each epoch, who speaks to us as naturally from the walls of the Castle of Cagliari as from the stairs of the Cathedral of Barcelona, from the halls of the National Archives as from the workshop of Joan Figuera, moving without being seen amongst busy apprentices keen to impress their master. With familiarity and wit, our narrator, a kind of ghost or guardian angel, perhaps an erstwhile apprentice explaining in the here and now the story of his own time, accompanies us on a journey of these historical sites. 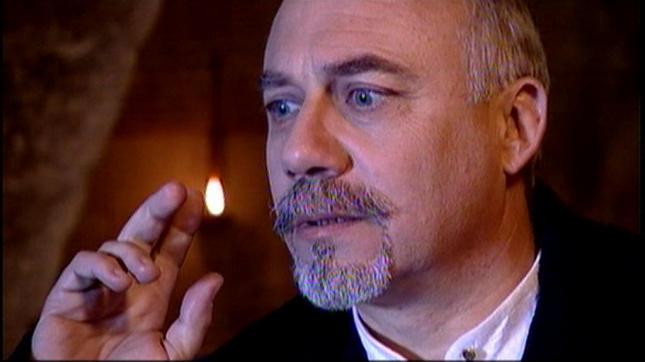 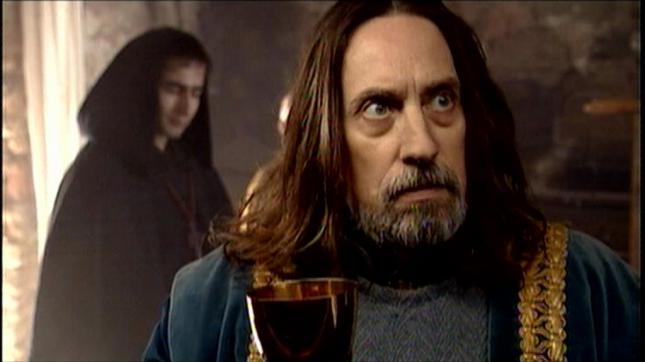